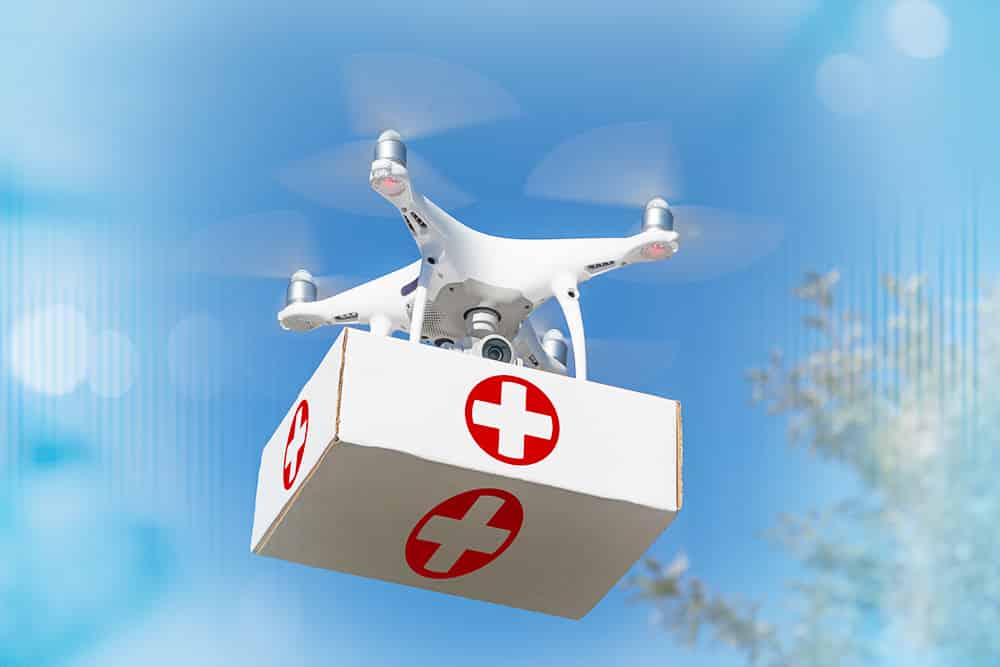 Drones Have Potential to Soar as Medical Life-Savers

Unmanned aerial vehicles (UAVs), better knowns as drones, are being studied for various medical applications, from carrying disaster relief aid to transporting transplant organs and blood samples. When it comes to medical emergencies, each moment is critical to patient survival.

What sets drones apart from traditional methods of emergency transport is the ability to sidestep traffic in populous areas, circumventing bad road conditions where the terrain is hard to navigate.

How a Medical Drone Works

Alec Momont, an engineer graduate student at Delft University of Technology in the Netherlands designed a drone that can be used in emergency situations during a cardiac event. The unmanned drone carries essential medical equipment, including a small defibrillator. The autonomously navigating mini airplane only weighs 4 kilograms (8 pounds) and can fly at around 100 km/h (62 mph). If strategically located in dense cities, it can reach its target destination quickly. It follows the caller’s mobile signal by using GPS technology and is also equipped with a webcam. The first responder on site is provided with a defibrillator and can be instructed on how to operate the device as well as be informed on other measures to save the life of the person in need. The University’s research estimates that Momont’s emergency drone could drastically increase the odds of heart attack survival from by over 60%.

In the wake of a natural disaster, it can be especially difficult to efficiently transport important medical supplies and vital transplant organs to rural areas. A study performed by researchers from Karolinska Institute and The Royal Institute of Technology in Stockholm, Sweden, showed that in rural areas, a drone—similar to that designed by Momont—arrived faster than emergency medical services in 93 percent of the cases and could save 19 minutes of time on average. In urban areas, the drone reached the scene of the cardiac arrest before an ambulance in 32 percent of the cases, saving 1.5 minutes of time on average.

In the United States, medical drones have yet to be extensively tested. Much remains to be done to address certain limitations and legal regulations. Researchers and advocates are still testing out how a drone could carry heavy medical supplies or endure extreme weather. The International Academies of Emergency Dispatch is still working to incorporate drone delivery into their guidelines for emergency response communication.

Despite these challenges, there is an increasing number of cases in which drones are being used in medical emergencies. In the wake of Hurrican Harvey this past year, the Federal Aviation Administration authorized 43 drone operators. In response to the drones’ contributions to the hurricane response efforts, a former FAA representative argued that the situation provided a “really extraordinary example of why this technology has to move forward at a much faster speed.”

Amazing Concept.
It is a very useful device, we can use it in medical emergencies. Which help to save the many life’s.
Nice Article.
Keep updating us.