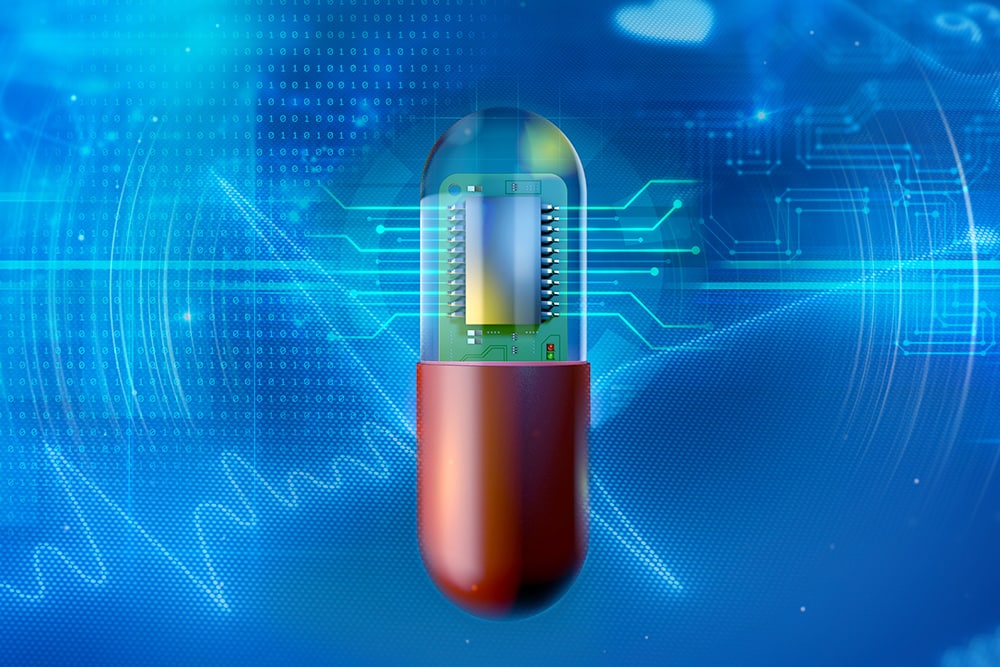 What if medical devices could be inserted or implanted into the body, without needing to be powered by batteries? Such devices could potentially be used to deliver drugs, monitor conditions, or treat disease by stimulating the brain with electricity or light.

This type of technology is currently being developed by MIT researchers, working in conjunction with scientists from Brigham and Women’s Hospital.

The implants are powered by radio frequency waves, which can safely pass through human tissues. In previous animal testing, the researchers demonstrated that the waves can power devices located 10 centimeters deep in tissue, from a distance of 1 meter. “Even though these tiny implantable devices have no batteries, we can now communicate with them from a distance outside the body. This opens up entirely new types of medical applications,” asserts Fadel Adib, an assistant professor in MIT’s Media Lab and a senior author of the paper. The research will be presented at the Association for Computing Machinery Special Interest Group on Data Communication (SIGCOMM) conference in August.

The fact that the device, as small as a grain of rice, requires no batteries further differentiates it from other technologies. Medical devices that can be ingested or implanted in the body offer clinicians new ways to diagnose, monitor, and treat many diseases. Researchers are now working on a variety of ingestible systems that can be used to deliver drugs, monitor vital signs, and detect movement in the GI tract.

“Having the capacity to communicate with these systems without the need for a battery would be a significant advance. These devices could be compatible with sensing conditions as well as aiding in the delivery of a drug,” says Giovanni Traverso, an assistant professor at Brigham and Women’s Hospital, Harvard Medical School, a research affiliate at MIT’s Koch Institute for Integrative Cancer Research, and an author of the paper.

Current implantable medical devices, such as pacemakers, carry their own batteries, which not only occupy most of the device’s space, but also offer a limited lifespan. Adib envisions much smaller, battery-free devices, and has been exploring the possibility of wirelessly powering implantable devices with radio waves emitted by antennas outside the body. In the brain, implantable electrodes that deliver an electrical current are used for a technique known as deep brain stimulation, a frequent treatment for Parkinson’s disease or epilepsy. These electrodes are now controlled by a pacemaker-like device implanted under the skin, which could be eliminated if wireless power were used.

Until now, this has been difficult to successfully achieve, as radio waves tend to dissipate as they pass through the body, ultimately becoming too weak to supply enough power. In order to overcome this obstacle, the researchers devised a system that they termed “In Vivo Networking” (IVN). This system relies upon an array of antennas that emit radio waves of slightly different frequencies; as the radio waves travel, they overlap and combine in different ways. At certain junctures, when the high points of the waves overlap, they can provide enough energy to power an implanted sensor.

“We chose frequencies that are slightly different from each other…we know that at some point in time these are going to reach their highs at the same time…and will be able to overcome the energy threshold needed to power the device,” states Adib. With the new system, the researchers do not need to know the precise location of the sensors in the body, as the power is transmitted over a large area–meaning that they can power multiple devices at once. At the same time that the sensors receive a burst of power, they also receive a signal that communicates to them to relay information back to the antenna. The researchers say that the signal could also be utilized to stimulate the release of a drug, a burst of electricity, or a pulse of light.

I like this so much! I used about three time after I get this one, really amaze me! It was so powerful and different colors with different function. I used the highest level and every time about 30 minutes with my lotion and essence, I can feel it turns warm and help pulling my face up. Very comfortable temp and does not feel hurt or burn. I also have a few wrinkles on my forehead and neck, So I am going to focus on neck in the future with red light function. Since every color has different function, I did four colors already and will doing more in the future! High recommend !
Regards
Kellfris