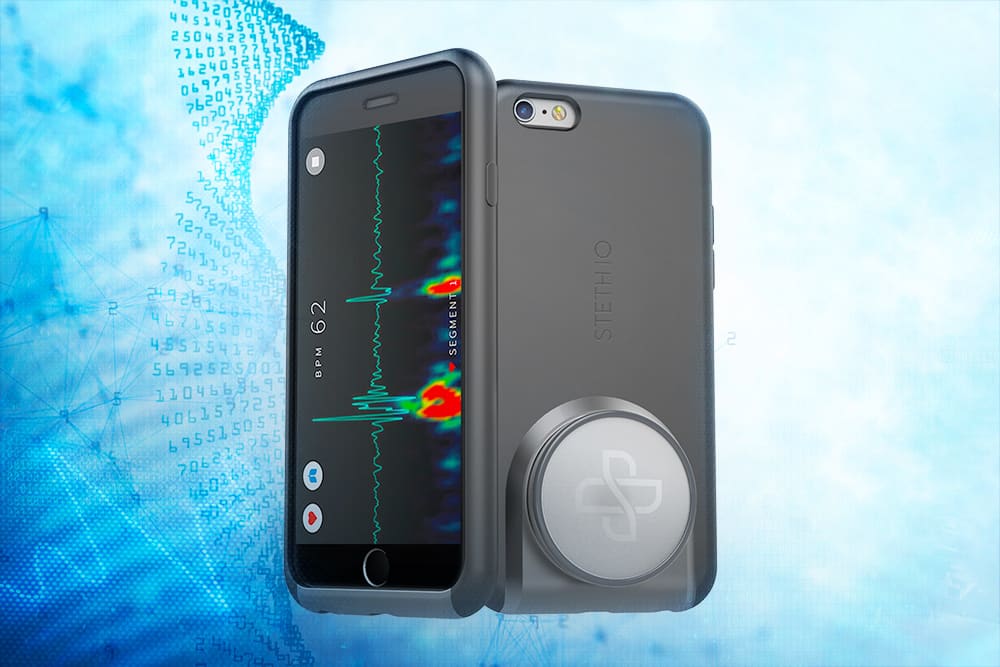 Now there is a new device, a “smart” stethoscope, that helps doctors detect and diagnose heart problems. Steth IO, is built directly into the protective case of a physician’s iPhone (models 6 and higher). Functioning like a stethoscope, it lets physicians listen to and measure heart rates or lung sounds by running an app and holding the phone up to a patient’s chest.

“I have been using this product for a few months now … and as well as helping my diagnoses, I’ve found patients are much more engaged in their own physical exam,” according to a statement by Dr. Mahesh Mulumudi. He is president, CMO, and cofounder of Steth IO, as well as the division chief of medicine and medical director of interventional cardiology at Providence Regional Medical Center. “They love to see and hear their own heart and lung sounds.”

Here’s how Steth IO’ operates. Without the need for batteries or charging, it draws power directly from the user’s iPhone. A free app allows practitioners a visualization of the patient’s heart and lungs on the phone’s screen while using any pair of headphones to listen. Other benefits: doctors can make a recording of their examination, organize each by patient within the app’s menus, add notes and flag clips within the recordings, and export or share the file if a second opinion is needed.

According to a company representative, “What makes Steth IO’s stethoscope unique is that the bell of the scope is integrated into an iPhone case, and is a patented, acoustic device that channels the sounds into the microphone of the smartphone…. The Steth IO application displays the sounds captured in a real-time visualization. This allows the physician to see and hear heart or lung sounds at the same time, using their phone.”

Steth IO app’s digital filters automatically boost important frequencies and attenuate background noise. The company wants to add AI capabilities to assist practitioners. Specifically, a machine learning capability is planned for later this year that will analyze recorded heart and lung sounds and highlight to the physician those that likely need further attention.

Patients with chronic heart disease often end up in the emergency room when they have an episode, sometimes making several of the expensive and time-consuming trips every year. Mulumudi is hopeful that the data from Steth IO, and artificial intelligence, could help doctors detect problems before they become emergencies.

The first version of Steth IO’s digital stethoscope was created by Mulumudi’s son, Suman Mulumudi, in 2013. He was 15 years old at the time, and now holds a position as the company’s cofounder and CPO while pursuing a computer science degree at Columbia University’s School of Engineering and Applied Science. According to Mulumudi, the team has been dos not intend to replace the original stethoscope, a device that has long been major physician symbol. “The stethoscope has always been the symbol of medicine,” Mulumudi said. He doesn’t intend to change that — he just wants to give it a technological boost.

Steth IO, with eight employees, is located in Bothell, Wash. Steth IO is currently available for a variety of iPhone models, although the company does not yet have offerings for Android devices.