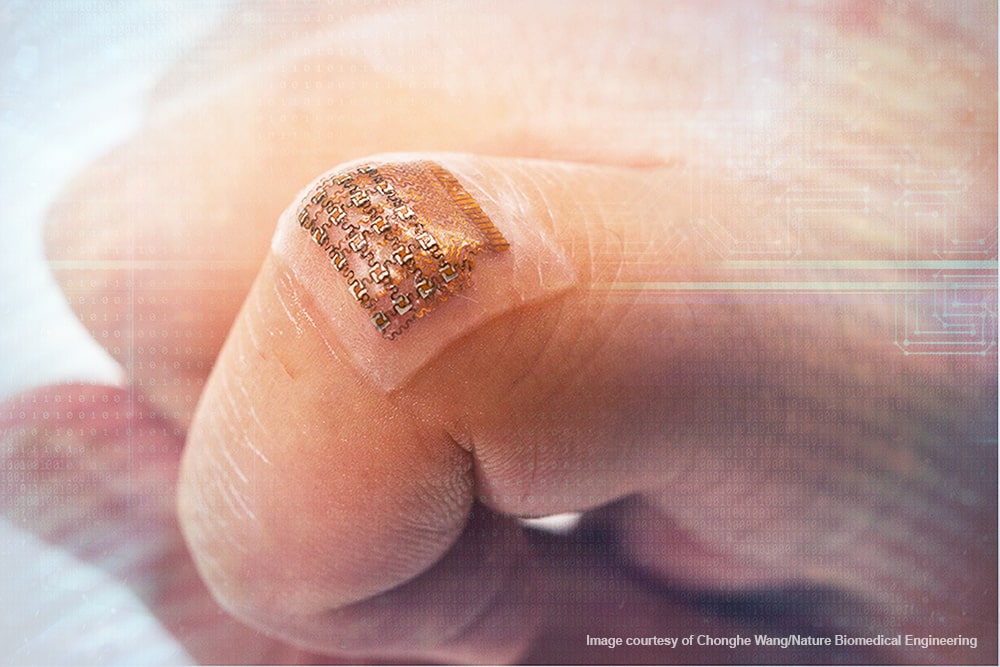 Throughout testing the patch was said to perform as well as some clinical methods to measure blood pressure. The device could help detect cardiovascular problems earlier on and with greater precision. The patch uses ultrasound, so it could potentially be used to non-invasively track other vital signs and physiological signals from places deep inside the body.

The patch was tested on a male subject, who wore it on the forearm, wrist, neck, and foot. Tests were performed both while the subject was stationary and during exercise. Recordings collected with the patch were more consistent and precise than recordings from a commercial tonometer. The patch recordings were also comparable to those collected with a traditional ultrasound probe.

“Wearable devices have so far been limited to sensing signals either on the surface of the skin or right beneath it. But this is like seeing just the tip of the iceberg,” said Sheng Xu, a professor of nanoengineering at the UC San Diego Jacobs School of Engineering and the corresponding author of the study. “By integrating ultrasound technology into wearables, we can start to capture a whole lot of other signals, biological events and activities going on way below the surface in a non-invasive manner.”

Physicians involved with the study say the technology would be useful in various inpatient procedures. According to Dr. Brady Huang, a co-author on the paper and radiologist at UC San Diego Health, “This has the potential to be a great addition to cardiovascular medicine. In the operating room, especially in complex cardiopulmonary procedures, accurate real-time assessment of central blood pressure is needed—this is where this device has the potential to supplant traditional methods.”

The ultrasound patch, developed by the UC San Diego-led team, can be worn on the skin and provides accurate, precise readings of central blood pressure, even while the user is moving.
Applications include real-time, continuous monitoring of blood pressure changes in patients with heart or lung disease, as well as patients who are critically ill or undergoing surgery.

On the significance of the new device co-author Chonghe Wang, a nanoengineering graduate student at UC San Diego, stated: “A major advance of this work is it transforms ultrasound technology into a wearable platform. This is important because now we can start to do continuous, non-invasive monitoring of major blood vessels deep underneath the skin, not just in shallow tissues.”